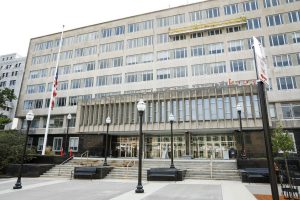 Madison is set to receive about $7.5 million from the federal government to help prevent  evictions and promote housing stability among eligible households. The City Council adopted a resolution Tuesday authorizing up to 90% of the funds to the Tenant Resource Center with the rest allocated to designated community organizations.

Several speakers expressed doubt in the TRC’s ability to manage the funds and adequately support the community, citing challenges with the center distributing $10 million in federal funds received by the county last summer.

Brandi Grayson, founder and CEO of Urban Triage and a City Council candidate, said “equity looks like funding all Black and brown organizations.” Speakers said choosing a white-led, larger organization instead of groups like Urban Triage, Centro Hispano and the Latino Consortium for Action sends the wrong message that people of color aren’t equipped to do the work.

“We’re the ones serving the people,” Grayson said.

Earlier in the day, Centro Hispano executive director Karen Menendez Coller, along with other members of the Latino Consortium for Action, announced they would re-open emergency relief funds for 2021 because of the great need and called on the city to partner with them.

Menendez Coller supported the leaders of color speaking at the meeting.

“All of these voices that you’re hearing are voices of color that are speaking to a primary white City Council that has failed to create a framework to address the needs of the community during a time of crisis,” Menendez Coller said.

Community Development Director Jim O’Keefe said the city has had “precious little time to react” to the news that Madison will be receiving federal aid.

City officials did not learn until late in 2020 that the federal government would be directly distributing aid for rental assistance, leaving little time for staff to develop a way to deploy the funding.

“We did not know we were going to get rental assistance funding coming directly to the city until the very end of the year,” Mayor Satya Rhodes-Conway said. “When we did, staff started scrambling to work on it.’

According to federal guidelines, 90% of the federal funding must be used to provide direct financial assistance. The city followed Dane County’s model of using the TRC to distribute the funding.

“We opted to use the Tenant Resource Center as the primary conduit for rental assistance dollars thinking and hoping that other partners in the community would work with them in ensuring that underserved communities within the city would have access to the dollars,” O’Keefe said.

The city is not providing administration support dollars to the TRC.

An original proposal called for allocating the remaining 10% of the estimated $7.5 million for organizations that “promote housing stability” services. However, the council adopted a modified proposal put forward by Ald. Shiva Bidar, District 5.

The adopted resolution authorizes the city to designate $750,000 in federal money and $500,000 from the city’s COVID Relief Fund to the following 11 groups to assist eligible households secure rental assistance, prevent eviction and promote housing stability:

Bidar agreed with the community leaders advocating for greater funding, saying that the entirety of the funds should have been allocated to organizations led by people of color. She said she worked on the substitute resolution in an “attempt to right lots of wrongs in systems.”

“It is not a good process, and I will acknowledge and say that giving 90% of our money to a white-led organization and 10% to organizations led by brown and Black folks doing work in their communities is not equitable,” Bidar said.

The resolution also directs the city to use up to $50,000 to create a centralized mobile-responsive web application by June 30 to serve as a portal and database that residents and agencies can use .

Abigail Becker joined The Capital Times in 2016, where she primarily covers city and county government. She previously worked for the Wisconsin Center for Investigative Journalism and the Wisconsin State Journal.